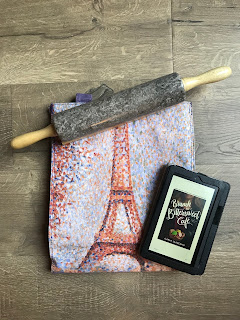 Did you read The Saturday Night Supper Club by Carla Laureano?  You don't want to miss out on the next fabulous read in this series-- Brunch at Bittersweet Cafe,   This next book comes out February 5, 2019.  Preorder now and be ready to read it right away.  I'm currently reading it and feel so blessed to be part of her launch team.  Trust me-- it's just as good as the first book, if not better!
at January 31, 2019 No comments: 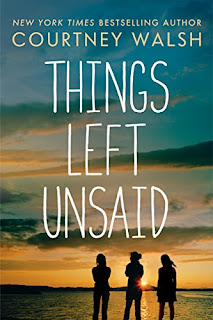 Things Left Unsaid by Courtney Walsh is an emotionally charged, powerful novel. I love this author’s books and find them consistent good reads. But this novel is something else altogether. This novel grips your heart quickly and doesn’t let go. Ms Walsh excels at storytelling but here she absolutely shines! The deep, heart wrenching characterization is remarkable. The characters have long histories that are very intertwined. The developments of the plot and the lessons they need to learn— it all happens so realistically and beautifully. I highly recommend this novel. It is one of the most emotionally resonant novels I’ve read in a long time. I received a digital copy of this book from the publisher with no obligations. These opinions are entirely my own. I also purchased a copy.
at January 26, 2019 No comments: 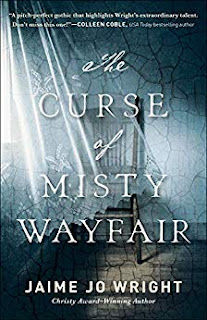 The Curse of Misty Wayfair by Jaime Jo Wright is the author's third book and maybe her best so far.  Having read Jaime's previous two books, I was excited to read the third one.  Here, she brings the same skillful storytelling that she is known for.  But this book stands apart from her first two in bringing a whole new level of suspense and creepiness.  I absolutely loved it!  I love reading mysteries and thrillers and not many books terrify me.  This book did just that.  I had some trouble reading it at night, which never happens.  Jaime is so talented in her ability to tell two stories simultaneously and weave multiple decoys and terrifying events in both story lines.  Honestly, Jaime could teach a class on how to build suspense and I am positive that many experienced writers would want to take it.  Who is this book for?  Don't be deterred by the suspense.  This book is for anyone who loves amazing storytelling, historical fiction, and novels filled with tangible hope.  I love the novel's strong theme of hope that is rooted in who God is yet never comes across as too preachy.  I believe this book would appeal to people of many different background and ages.  Don't miss this book!  2019 is only beginning but I think I just read one of the best books of the year. I received a digital copy of this book from the author with no obligations and would have purchased it anyway.  These opinions are entirely my own.
at January 22, 2019 No comments: 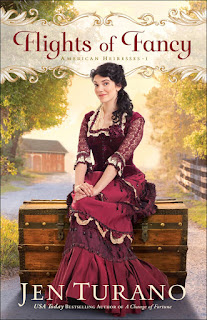 Miss Isadora Delafield may be an heiress, but her life is far from carefree. When her mother begins pressuring her to marry an elderly and uncouth duke, she escapes from the high society world she’s always known and finds herself to be an unlikely candidate for a housekeeper position in rural Pennsylvania. Mr. Ian MacKenzie is known for his savvy business sense and has built his reputation and fortune completely on his own merits. But when his adopted parents are in need of a new housekeeper and Isadora is thrown into his path, he’s unexpectedly charmed by her unconventional manner. Neither Isadora nor Ian expected to find the other so intriguing, but when mysterious incidents on the farm and the truth of Isadora’s secret threaten those they love, they’ll have to set aside everything they thought they wanted for a chance at happy-ever-after. 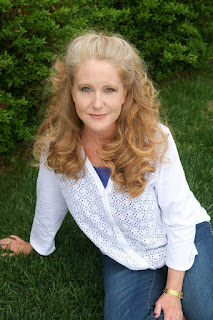 One of the Funniest Voices in Inspirational Romance by Booklist, Jen Turano is a USA Today Best-Selling Author, known for penning quirky historical romances set in the Gilded Age. Her books have earned Publisher Weekly and Booklist starred reviews, top picks from Romantic Times, and praise from Library Journal. She’s been a finalist twice for the RT Reviewers’ Choice Awards and had two of her books listed in the top 100 romances of the past decade from Booklist. When she’s not writing, she spends her time outside of Denver, CO.

Q & A With Jen Turano

“Flights of Fancy” is the first book in the American Heiress Series. What inspired you to write this series? The inspiration for this entire series started off with a What If? All of my proposals for new series start off that way, and this time it was – What if Consuelo Vanderbilt had balked when her mother insisted she marry the Duke of Marlborough – and then that led to – What if she’d run away until her mother came to her senses? Just like that, an entire series was born – a bit of a different take on American heiresses because in all three books, my heiresses might decide to go a tad…rogue. We start off with Miss Isadora Delafield – who does run off to avoid marriage to a duke, then we get to meet Miss Poppy Garrison, who is an unexpected heiress but who can’t quite seem to get a handle on the expected social decorum of the day, and then the final book revolves around Miss Beatrix Waterbury – who gets banished to Chicago after she annoys her mother one too many times, and once there, well, gets up to a bit of mischief. How do you come up with the names of your characters? I find most of my names as I research the New York Four-Hundred, although I normally take a first name here, a last name there so I’m not stepping on any toes by writing about an actual historical figure – except for some of the main figures in New York society back then, such as Mr. Ward McAllister – who was the social arbiter of the day, or Mrs. William Astor, who was the queen of that society. What I don’t do is simply make up names, no matter how outrageous they may appear. And, no matter how I may love a certain name, if the character decides it doesn’t suit them, that’s it, it’s out and I’m back to the drawing board. How do you picture your character? Do you use Pinterest, magazines, movies? Odd as this may seem, I don’t use pictures for my characters. They start off in my mind as a blurry figure, and then, they develop from there – I like to keep my descriptions of them somewhat vague on the pages so that the reader can imagine them exactly the way they’d like them to be. What are some of your favorite resources for historical research? I’ve been building up a research library over the past few years and now have over 200 books dedicated to the Gilded Age. My favorites are – “A Season of Splendor” by Greg King, “Society as I Have Found It” by Ward McAllister, “The Gilded Age in New York – 1870-1910” by Esther Crain, and “ ‘King Lehr’ and the Gilded Age” by Elizabeth Drexel Lehr. The setting for “Flights of Fancy” is a bit of a departure for you since it’s set in and outside of Pittsburgh. Any reason for that? My mom was born in Pittsburgh, and unfortunately, her father, a prominent attorney back in the day, died when she was only four. I thought it would be cool to set a story in Pittsburgh, which would then allow me to really dive into some research. And get this – while I was doing that research, I found this obscure journal called “Memoirs of Allegheny County, Pennsylvania. In that journal was a bit about my great-grandfather, Fred, his wife, Susie, my grandfather, and his brother and sister, but I’d never heard about this brother, who apparently died quite young. One of the most fabulous research tidbits I’ve uncovered to date. What are you working on now? I’ve just recently turned in the content edits for the second book in this series, “Diamond in the Rough,” and I’ve also turned in a novella about the Harvey Girls that will be coming out in a novella collection in Fall, 2019. With those out of the way, I’m now starting the third and final book in the American Heiress series, Miss Beatrix Waterbury’s story, but I’m having a bit of a struggle with the hero at the moment – he was supposed to be Edward, but he doesn’t want to be an Edward – I think he wants to be Norman – but, time will tell on that one – don’t hold me to the name – it’ll depend on if he changes his mind or not – pesky characters. You seem to enjoy adding animals in many of your stories. Will we find any animals in “Flights of Fancy?” Since Miss Isadora Delafield ends up on a farm, I do believe you will find a few animals, such as an adorable cow by the name of Buttercup, a few goats that seem to have a great liking for laundry, and…there might be some chickens. Thanks for stopping by today, everyone! Always enjoy visiting with all of you – in fact, that’s the best part of my job! All the best, ~ Jen ~ 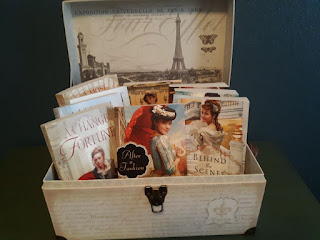 To celebrate her tour, Jen is giving away a grand prize of a trunk filled with all of Jen’s full-length novels released to date!!
Be sure to comment on the blog stops for nine extra entries into the giveaway! Click the link below to enter. https://promosimple.com/ps/d8d1/flights-of-fancy-celebration-tour-giveaway
at January 13, 2019 No comments: