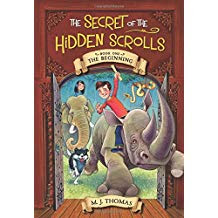 Book Review: The Secret of the Hidden Scrolls: The Beginning by M.J. Thomas

As an elementary teacher for over a decade, I have read lots of books over the years.  I have not been this excited for new children's literature in many years!  I recently discovered The Secret of the Hidden Scrolls: The Beginning by M.J. Thomas.  My seven year old son is a great reader, but he does not often want to pick up a book and read on his own.  We've enjoyed some chapter book series' before, mostly the A to Z Mysteries series, but no Christian series has captured his attention until now.  When I heard about The Secret of the Hidden Scrolls, I was intrigued and could not wait to try reading them with my son.  The books feature two children, Peter and his sister Mary, who go back in time to famous events in the Bible.  In the first book, the children travel back to the time of the Creation.  My son fell in love with these books!   We quickly read this first book and are now on book 2.  I have to say that I also really enjoyed book 1.  It was such a fresh take on the Creation story and it really brought the story to life.  I highly recommend this book to both boys and girls ages 6-9.  There are some pictures throughout, which really helps beginning readers.  The reading level is comparable to other chapter books for kids this age.  My son and I read them together, and he reads them fine with little help.  If you are looking for a book to bring the Bible alive-- this is it!  This book now causes my son to please with me daily-- "Just one more chapter!"  Mr. Thomas, please write more books and write fast!  My son and I will be looking for more of these books soon.
at September 27, 2018 No comments: 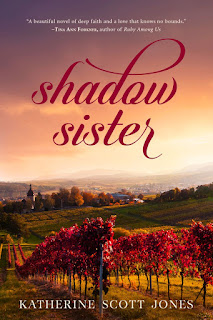 Working on her father’s vineyard allows Sarah Lanning to bury memories of a lost love and a career that might have been. But then her fractured family receives word that her estranged sister, Jenna, is dead, leaving behind an unexpected request: that Sarah travel to Bolivia to scatter her ashes. Accompanied by pilot Chase Maddox, Sarah embarks on an Andean journey that tests her devotion to home and exposes Jenna’s secret life. Each staggering discovery creates new mysteries—until the last, which leaves Sarah questioning everything she understood about family loyalty. At a crossroads, she must decide whether truth is worth the cost of forgiveness—and whether she can lay claim to a future of happiness without it. Bittersweet and bold, Shadow Sister explores the mysteries of the human heart and the bond of unquenchable love.

Shadow Sister is full of secrets and regrets that divide a family.  These secrets cast long shadows over the family and keep two sisters apart.  With Jenna's sudden death, Sarah is left to pick up the pieces and come to terms with her feelings for her sister.  The story is told in the alternating perspectives of Jenna and Sarah and is set in Bolivia and in a vineyard in Washington state.  Sarah's journey to pick up her sister's ashes soon becomes something more meaningful and she is forced to deal with her grief and her personal ambitions in ways she has avoided.  Can she overcome their secrets? This is a story about regrets and facing the possibility of not having a second chance.  It's about what it means to love someone deeply, even after their death.  This is a powerful, life-changing story, one not to be missed!  Its message will resonate with readers from many backgrounds.  I received a digital copy of this book from the author with no obligations.  These opinions are entirely my own. 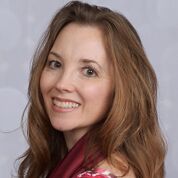 
Katherine Scott Jones grew up in cities on every U.S. coast and overseas as her family moved with her father’s Navy career. Seattle became home when she married her husband twenty-eight years ago. After graduating Whitworth University with a degree in communications, she established herself as a freelance writer before turning her hand to fiction. She blogs about books that celebrate beauty at www.katherinescottjones.com. Katherine and her husband have two teenage children. Shadow Sister is her second novel.

Much as I love a good movie, my favorite part often comes at the end when the director includes outtakes—those false starts and bits from the making of the movie that wind up on the cutting room floor. In a similar vein, I’m going to let you in on some of what went into the creation of my novel, Shadow Sister, but did not make the final cut. Shadow Sister is a work of inspirational women’s fiction with a global accent—written for women with a heart for complex relational issues as well as a passion for biblical justice. It is the story of a vintner’s daughter who travels to Bolivia to scatter her estranged sister’s ashes. There, she unravels secrets that test her devotion to home and make her question whether truth is worth the cost of forgiveness. Shadow Sister explores the mysteries of the human heart and the bond of unquenchable love. Now that you know a bit about what it is, come along as I pull back the curtain and share an exclusive peek at what Shadow Sister is not.

Working Titles
It took me a while to finally land on the right title. Early contenders:
– The Sweetness of Light
– Variations on Shadows and Light.

Characters
It also took a bit of experimenting before I found the right combination of people and places: – Sarah, the main character, was originally a marine biologist. I first imagined the story set in Seattle before moving it to the fertile plains of Eastern Washington wine country.
– Sarah was originally engaged; and Chase and Rachael were involved.
– The gender of Matilde’s baby changed from what I first plotted. That simple switch got me unstuck from a perplexing snag of writer’s block.
– Names:
o Nicole, Stasi, Rees, and Stephen were all main-character names I considered and rejected.
o Little sister Sarah and big sister Jenna began as litter sister Jenna and big sister Kate. Then Jenna became Somer and finally Sarah, while Kate became Jenna.
o Sassy Britches is named after an actual racehorse by the same name.

Unused research Of course, story exploration turned up far more tidbits of interesting info than I could possibly fit into the pages of a novel! Some of what I wished I could have used…

– Bolivian fun facts o Customs.
o Drinks. While the traditional Bolivian beverages api and mate de coca are featured in Shadow Sister, several others are not:
o Language. Spanish, Aymara, and Quechua are Bolivia’s three national languages, and they differ from each other greatly. For example, the number one in Spanish = uno, Aymara = ma, Quechua = hoq. – Quotes: o On wine: “Wine is sunlight held together by water.” ~ Galileo o On art: “Art enables us to find ourselves and lose ourselves at the same time.” ~ Thomas Merton I hope this glimpse into what didn’t make it onto the pages of Shadow Sister piques your interest for discovering what finally did!

On Tour with Celebrate Lit


Reflections From My Bookshelves, September 5


The Power of Words, September 5


Among the Reads, September 5


Inspirationally Ever After, September 10


proud to be an autism mom, September 16 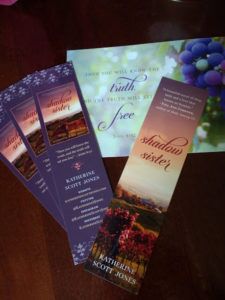 To celebrate her tour, Katherine is giving away a grand prize that includes a personalized signed print copy of the book, a Shadow Sister bookmark, a Frame-able print, Book-lover’s tea, 6 Handcrafted notecards, and a set of vineyard-themed playing cards!!
Be sure to comment on the blog stops for nine extra entries into the giveaway! Click link here to enter.